(MENAFN – The Conversation) In 2018 a team of Italian scientists announced to the world that there was a lake on Mars . Using satellite radar data, the team detected a very bright area approximately 20 kilometres across located about 1.5 kilometres deep under the ice and dust of the south polar cap.

After analysis, they concluded that the bright area was a subglacial lake filled with liquid water. The discovery raised some fundamental questions.

Was this the only lake hidden beneath the ice on Mars? How could liquid water exist in the extreme cold of the Martian south polar region, where the average surface temperatures are lower than -100 °C?

After acquiring additional satellite data, my colleagues and I have discovered three more distinct ‘lakes’ near the one found in 2018 and confirmed that all four bodies contain liquid water.

How can we see lakes under the ice on Mars?

The radar sounder MARSIS (Mars Advanced Radar for Subsurface and Ionosphere Sounding) is one of eight instruments on board the European Space Agency orbiter Mars Express. This scientific spacecraft has been circling the red planet since December 2003.

The orbiting radar directs radio ‘chirps’ toward the planetary surface. These signals are partly reflected back by the surface, and partly penetrate deeper, where they may be absorbed, scattered, or reflected back to the radar. Liquid water reflects radar signals better than many other materials, so the surface of a body of liquid water shines brightly in a radar image.

Radar sounders are used on Earth to detect subglacial lakes in Antarctica, Greenland and Canada. Here, a technique called radio-echo sounding (RES) is commonly used to analyse the signals.

There are some obvious differences between how radar sounding is used on Earth and on Mars. For a start, MARSIS operates from altitudes between 250 km and 900 km above the surface, it has a 40-metre long antenna, and it operates at much lower frequencies (1.8-5 MHz) than Earth-based radar sounders. 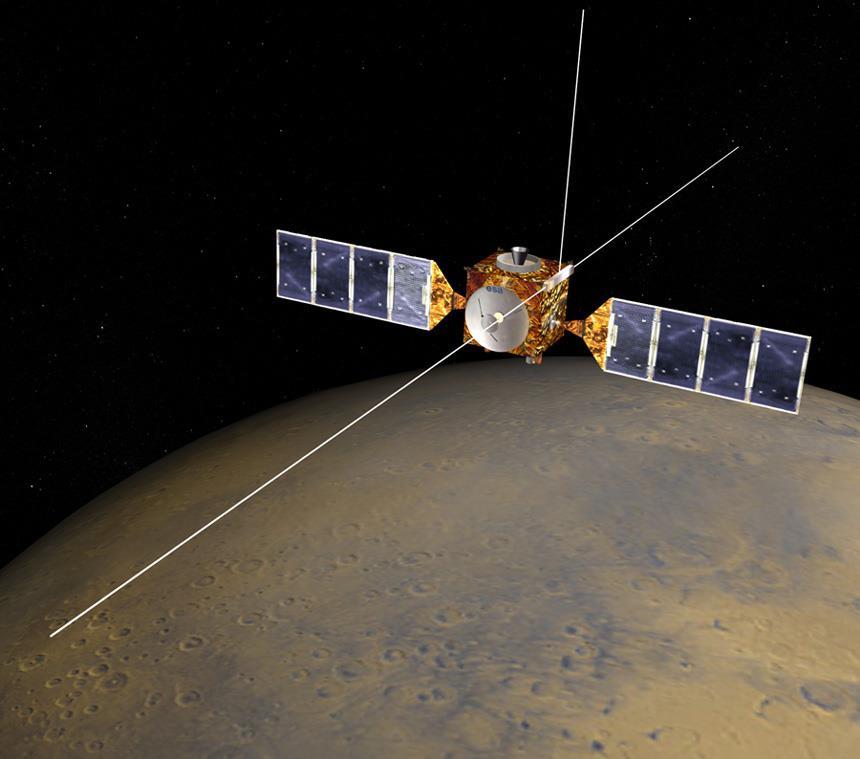 These differences meant we had to do some work to adapt standard radio-echo sounding techniques for use with signals from MARSIS. However, we were able to analyse data from 134 MARSIS tracks acquired between 2010 and 2019 over an area 250 km wide and 300 km long near the south pole of Mars.

In this area, we identified three distinct bright patches around the lake already ‘seen’ in 2018. We then used an unconventional probabilistic method to confirm that the bright patches really do represent bodies of liquid water.

We also obtained a much clearer picture of the shape and extent of the lake discovered in 2018. It is still the largest of the bodies of water, measuring 20 km across on its shortest axis and 30 km on its longest.

How could liquid water exist beneath the Martian ice?

The surface temperatures in our study area are around -110 °C on average. The temperatures at the base of the ice cap may be slightly warmer, but still way below the freezing point of pure water.

So how can bodies of liquid water exist here, let alone persist for periods of time long enough for us to detect them?

After the first lake was found in 2018, other groups had suggested the area might be warmed from below by magma within the planet crust. However, there is to date no evidence this is the case, so we think extremely high salt levels in the water are a more likely explanation.

Read more: What on Earth could live in a salt water lake on Mars? An expert explains

Perchlorate salts, which contain chlorine, oxygen, and another element, such as magnesium or calcium, are everywhere in the Martian soil. These salts absorb moisture from the atmosphere and turn to liquid (this process is termed ‘deliquescence’), producing hypersaline aqueous solutions (brines), which crystallise at temperatures far below the freezing point of pure water. Furthermore, laboratory experiments have shown that solutions formed by deliquescence can stay liquid for long periods even after temperatures drop below their own freezing points.

We therefore suggested in our paper that the waters in the south polar subglacial lakes are ‘salty’. This is particularly fascinating, because it has been shown that brines like these can hold enough dissolved oxygen to support microbial life.

Could conditions be right for life beneath the ice?

Our discoveries raise new questions. Is the chemistry of the water in the south polar subglacial lakes suitable for life? How does this modify our definitions of habitable environments? Was there ever life on Mars?

To address these questions new experiments and new missions must be planned. In the meantime, we are gearing up to continue acquiring MARSIS data to collect as much evidence as possible from the Martian subsurface.

Each new piece of evidence brings us one step closer to answering some of the most fundamental scientific questions about Mars, the solar system and the universe.

Legal Disclaimer: MENAFN provides the information “as is” without warranty of any kind. We do not accept any responsibility or liability for the accuracy, content, images, videos, licenses, completeness, legality, or reliability of the information contained in this article. If you have any complaints or copyright issues related to this article, kindly contact the provider above.